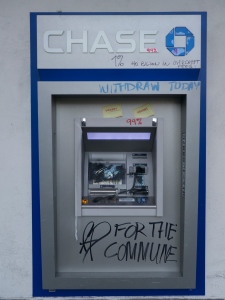 I am still struggling to understand what motivates the black bloc vandalism of the anarchists. I gather that they believe the big banks of the world have lost the ability to communicate with anything but monetary ammunition. It’s true, the bank’s way of transacting with the world is inherently violent, since their modus operandi is always to seek the most self-profiting relationship they can with their “customers” (though it is not immediately clear who is serving who).

It could be that the only effective way of communicating with a bank, or corporation more generally, is to break the windows of its storefronts.

But I don’t want to communicate with corporations. They are not real people. They have no face. Corporate storefronts, like their souls, are mere idols. When the anarchist throws a hammer through a window, he feels as though he’s wounded and defaced the corporation. But he is worshipping (by hating) a false idol. He hasn’t touched the true substance of corporate ideology, since it lives not in buildings or billboards, but in the hearts of the people who wake up every morning to go to work inside a corporation for a living.

A corporation has no life outside its workers (of course, nor do the worker-citizens of our democracy™ have much of a life outside corporations). We are not fighting a war against corporations. We couldn’t possibly be. They do not speak our language and so remain unfazed by even our most biting slurs. We are fighting an alien ideology that has taken up root right amongst us. If our goal is to awaken ourselves from our roles as worker and consumer, it makes no sense to throw things at the businesses where we make our daily living. Inevitably, within a few business days, “workers” (i.e., us) will dutifully replace the windows and repaint the walls. The food factories, banks, etc., will soon be back in commission and we will soon be shoppers once again. If we want to have a deep effect on the continuity of the system, we must attack it at the level of dreamtime, where play reigns and the only wage earned is measured in wonder.

The true challenge is to awaken the imagination slumbering in the human heart so that we have the faith and the creativity to bring forth a new world. Until we can do that, we will still be praying to walls, stimulating the growth of the same capitalist economy we despise by breaking replaceable windows. If you stop and look before you throw that hammer, you may see your own reflection in the unbroken pane. 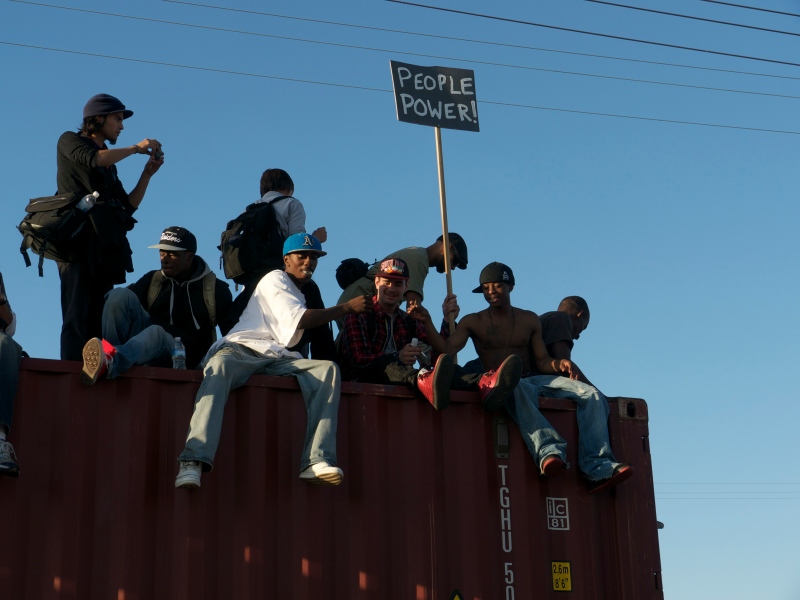