I’m thoroughly enjoying Jimena Canales social, scientific, and philosophical history of the Einstein-Bergson debate in The Physicist and the Philosopher: Einstein, Bergson, and the Debate that Changed Our Understanding of Time. There are quite a few pages on Whitehead’s alternative rendering of relativity theory. There is one place (198-99) where Canales, while commenting on George Herbert Mead’s criticism of Whitehead, offers what to me reads like a distortion of Whitehead’s concept of eternal objects. It could be that Whitehead only worked out a more coherent understanding of eternal objects in Process and Reality as a result of his early exchange with Mead at Harvard in September of 1926. 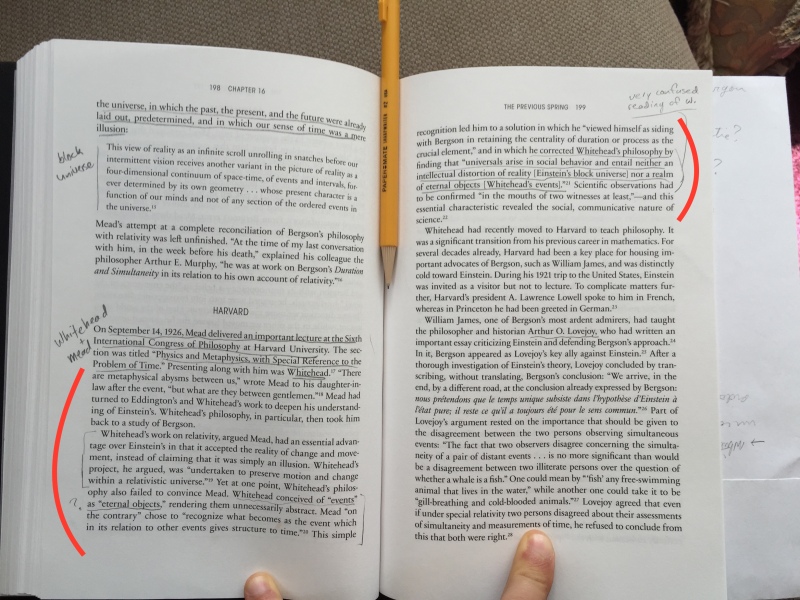 I’ve often wondered if it makes more sense to replace Whitehead’s phrase “eternal object” with the poet Charles Olson’s suggestion of “eternal event.” The poet’s phrase may actually convey Whitehead’s concept better than Whitehead’s way of wording it. Perhaps Whitehead’s original intent was to put eternal objects in irrevocable tension with occasional subjects, such that experience always presupposed participation in both. Every event or occasion is eternally temporal, a differential repetition or concrescence of Creative Process into creaturely product.

Earlier today, Justin commented under my essay on Whitehead’s cosmological scheme titled Physics of the World-Soul. He took issue with Whiteheadian jargon and with what he thought was the “straw man” version of Einstein I spent several paragraphs critiquing. These are both valid concerns. I’d argue that the former concern is true of every significant thinker. Personally, if I don’t find a philosopher’s prose difficult to understand at first pass, I quickly become bored with the ideas. Sure, Burt Russell is often clearer and more straightforward than the “muddleheaded” Whitehead. But Russell’s demand that the depths of the world reveal themselves to him in clear and distinct ideas may in fact do violence to the chaotic heteronomy of those depths. New ideas cannot always be expressed in old words. The latter concern is something I hope to respond to more fully after I finish Canales’ book. The wider question of the relationship between space, time, and experience in an ontology of organism is one I hope to expand upon in my dissertation.