A few classmates from CIIS and I attended Occupy Oakland’s General Strike on Wednesday. I meant to report on my experience earlier (in today’s fast-paced world, news gets old within 2 days), but I was unable to gather my thoughts after the day’s (and evening’s) events unfolded. As an intellectual and an introvert, I am usually a bit anxious whenever I get involved in mass movements: nuanced cosmopolitical critique can quickly become lost in the emotionally incendiary uproar of ten thousand marchers. The General Strike was a success overall, but the message of peaceful protest sent around the country and the world would have been that much clearer if it were not clouded by the violence and vandalism of a few asocial anarchists.

Here is what the scene at a local Whole Foods was like on the ground:

Protesters dressed in plain clothes can be seen trying to encourage non-violence while the anarchists dressed in black attacked them, shouting “the peace police must be stopped!”

Here is an NBC video of the scene from the sky.

The extent of my frustration with this small faction of anarchists is hard to express. They succeeded in tainting the symbolic power of Wednesday’s march by giving the main stream media exactly the sorts of images they needed to denounce the movement as chaotic and violent. Is capitalism a violent and oppressive economic system? Yes. But we will never critique it successfully by trying to fight it on its own terms. Only peaceful resistance has the moral power to transform people’s hearts and minds in the way that is needed. Capitalism rules over us because of the alienation, fear, and social fragmentation it encourages. This alienation, experienced by so many “consumers” and workers in this country, is only strengthened by the infantile temper tantrums of anarchists. What is their mission, really? I remain confused and disgusted by their tactics.

Earlier in the day, I personally encountered the group of black-masked anarchists while peacefully occupying a Wells Fargo bank in downtown Oakland. About 50 protesters had already successfully forced the bank to close its doors for the day.

The anarchists were leading a group of normal protesters in the direction of the Whole Foods they would eventually vandalize. Just before passing Wells Fargo, they smashed the windows at the Chase bank next door. Luckily, the peaceful morphic field we had established at the Wells Fargo was enough to discourage them from employing their tactics there. Just prior to their arrival, several of us had started washing the graffiti off the bank’s walls. 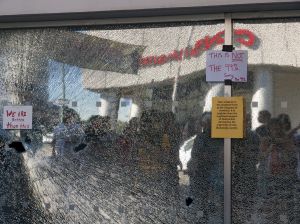 Despite these early signs of the violence that would eventually erupt as night fell in Oakland (see the second half of the first video embedded above), the spirit of the march on the port was uplifting and heartfelt. The lack of diversity at the San Francisco march on City Hall several weeks ago became all the more apparent to me as I marched beside people of all colors, classes, and ages. 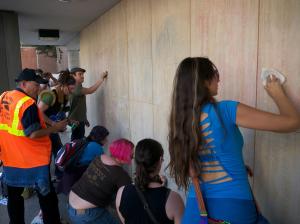 This was not a spoiled white student march; this was the poor and marginalized standing up and giving voice to their oppression. 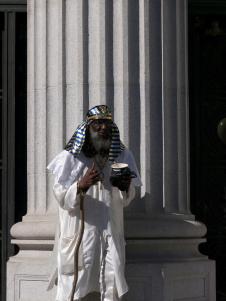 It would appear that the Pharonic phase of Western civilization is nearing its end.

At 4pm, after a series of rousing speeches at the general assembly of the Occupy camp in front of City Hall, thousands of us began marching toward the Port of Oakland. The scene upon reaching the overpasses leading to the docks was surreal.

I’ll have more reflections on the economic and political implications later this evening. For now, I leave you with some words of poetic wisdom from PCC‘s own Drew Dellinger: 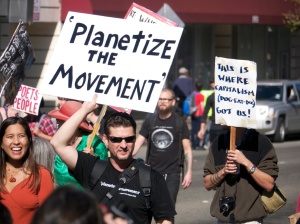 the total thrust is global justice

The total thrust is
global justice
so we gotta fix the politics
and put a check upon its economics
or before you know it, a warrior-poet
may try to upend the
corporate agenda that’s
got ’em blind to the real bottom line.
It’s intense when you sense the only interests
on the docket
are fat cats with Republi-Crats
in their pocket.
It’s crooked now
just look at how
the pundits are funded.
They’re devious at CBS and, yes,
they’ll choose the news that fits the script unless
I play tricks on the matrix.
(In case you can’t guess shit,
I’m not to be messed with.)
The folks know my art form
comes straight from the heart for ’em.
A lyrical storm that departs from the norm
and transforms as I’m giving
rhymes for the minds in the times that we live in.
I can’t hang with the anguish
and I don’t want my language to languish
’cause there ain’t nothing like Drew’s
hip hop haikus
I got a mandate
to disturb
the urban landscape.

We got tyrannies
right here in these
States,
and you never know
when they’ll go
right back to some tactics
like COINTELPRO.
If we could see through the lies
see how they brutalize
and get cops
to beat speech in the streets
and guard sweatshops.
I’m ending these industries.
Please can we factor the
effect of the
trajectory?
This whole place is racist
and sexist from North
Dakota down to Texas
with the twenty-first century’s
youth in penitentiaries
and the night never seemed this dark
but now half of the stars
are behind prison bars.
Oh say can you see?
But if we can dream a new day it may be.
You had to know the baddest bro
with the phattest flow would shake up the status quo
with my adjectives and adverbs and ad libs.
Like Gandhi
protest is my modus operandi.
It’s like Malcolm and Martin’s
evolution with art
and revolution
’cause the total thrust is
global justice.