At the center of Robert Bellah‘s 700 page account of the axial turn in the evolution of religion (Religion in Human Evolution, 2011) is a theory of play. The relaxed field generated by playfulness, according to Bellah’s richly empirical story, is the source of all human ritual and religion, and indeed of culture more generally. Play is symbolic, which is to say that when we are engaged in play, we are pretending, stepping out of the normal, ordinary course of daily life into an imaginal realm with no necessary connection to the world of biological survival. In the course of daily life, the so-called serious world, we are obliged to work, to “bring about [a] projected state of affairs by bodily movements” (Bellah quoting Alfred Shultz on p. 2). In the anxiety-free space of play, ends and means unite to produce a self-justifying, inherently enjoyable state of peace and mutual fulfillment. “Play,” says Bellah, “emerged in the evolution of mammals as a sphere sheltered to some degree from selectionist pressures, having its end internal to its practice, however much it may have proved adaptive in secondary and tertiary forms” (p. 112). 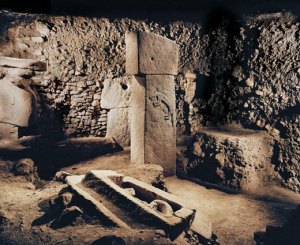 One way we might apply Bellah’s theory is to consider what it tells us about the history of work, in particular as it relates to the shift in socio-economic organization represented by the agricultural revolution. “Gobekli Tepe,” a gigantic, 12,000 year old temple structure uncovered by archeologists in Turkey in 2008, provides us with a counterexample to the standard account of human evolution. As the standard account goes, human beings needed to technologically secure their basic survival needs buy domesticating plants and animals before the supposedly superfluous activities of ritual, art, and religion (all closely related for archaic consciousness) could flourish. Gobekli Tepe suggests, instead, that the latter cultural activities pre-dated the shift to domesticated modes of production. Evidence at the site shows conclusively that the people who built this temple were hunter-gatherers. It does not seem such a stretch to suggest in light of the age of this site that the need for stable religious expression made the labor intensive shift to agriculture more worthwhile than it otherwise would have been for hunter-gatherers, the “original affluent society.” The great deal of detalied planning and hard work required to construct such a temple–a structure we may suppose produced for the people who constructed it a ritually protected relaxed field of spiritual and artistic play–makes clear that no necessary separation exists between the serious and the jovial. Human beings are quite willing to work harder in order to secure time and space for play. As cultural beings, we take play very seriously.

“I say that man must be serious with the serious. God alone is worthy of supreme seriousness, but man is made God’s plaything, and that is the best part of him. Therefore every man and woman should live life accordingly and play the noblest games and be of another mind from what they are at present… For they deem war a serious thing, though in war there is neither play nor culture worthy the name which are the things we deem most serious. Hence all must live in peace as well as they possibly can. What, then, is the right way of living? Life must be lived as play. Playing certain games, making sacrifices, singing and dancing, and then a man will be able to propitiate the gods, and defend himself against his enemies and win in the contest” (Laws 7.796).

As we can see, for Plato and for Bellah, play is quite a serious matter. Bellah connects play to the axial phenomenon of “renunciation.” A “renouncer” is one who, for spiritual reasons, rejects the political and economic roles assigned them by society. In rejecting society, they seek to establish schools (from the Latin, scola, and the Greek, skole, meaning “leisure”) of various kinds in order to teach and preserve their spiritual insights without being subject to the field of anxiety and toil ruling over the ordinary reality of the work day (the Greeks established schools, the Buddhists made monasteries, etc.). Perhaps the best examples of such renouncers in our own Western tradition are Socrates and Plato: they were both “in but not of the city and also criticized it from the outside,” says Bellah (p. 575). Renouncers are found in every axial culture; they are able to find support in their respective cultures, despite largely rejecting the premises of these same cultures, because everyone, even the ruling elite, have had a general sense of unease about the state of the world in which they live since about the axial age. Not until the irruption of linear time characteristic of this age was an apocalyptic end to the world readily conceivable; nor, for that matter, was the coming of a utopian future easily imaginable.

Religion, it seems, has had a complex series of effects on its human practitioners. It was perhaps the initiator of civilization, convincing us to give up our nomadic wandering to settle near the numinous power of elaborate temples, where, through the playfulness of ritualistic art and music, humans and gods transacted in a “time out of time.” The agricultural revolution demanded by such settlement, and the surpluses it created, then lead to the emergence of hierarchically organized chiefdoms, and eventually, to full-blown states. Societies organized around kinship–wherein everyone was somehow related to the primordial semi-divine ancestors–were increasingly replaced by kingship–wherein the king became the only link between peasants and the divine, and only an elite group of priests were permitted the free time for ritualized play. Amidst such injustice, the religious instincts of humanity erupted once again in the form of the great axial ethical critiques of civilized empire (e.g., the Jewish prophets, the Greek tragedians and philosophers, the Chinese Confucians, the Buddha…).

Play is symbolic, because as Bellah defines it, symbolism is the possibility latent in ordinary objects, persons, and events in the world of daily life to become “[meaningful] in another reality that transcends the world of working” (p. 8). The renouncers of empire who have emerged in the last 2,500 years or so have all critiqued the world of daily life, of working, by pointing to a transcendent realm beyond the immoralities of worldly politics and economics.

Today, as the global capitalist economy continues to convulse, the ideological bankruptcy of its supporters is becoming all the more transparent. Watch former mayor of NYC Rudy Giuliani speak to the conservative crowd at a recent meeting of the Americans for Prosperity Foundation about the “laziness” of those responsible for the Occupy movement:

“How about you occupy a job? How about working??” Giuliani goes on to compare the occupation of Wall Street to Woodstock, suggesting that protestors would rather have fun than work. In his mind, school is not an end in itself (as it was for students of Plato’s Academy and Aristotle’s Lyceum); rather, school is a means to an end: a job. The truly insidious thing about capitalism is that it commodifies everything, placing a monetary value even on time itself. Of course, time must first be falsified into a measurable quantity, namely industrial clock-time, before it can be monetized (see the work of Jean Gebser in The Ever-Present Origin). The time-anxiety experienced by the modern working person is a direct result of this falsification. Leisure time and recreation, when measured in terms of clock-time, is impossible, since genuine play is always an end in itself, never a means (for better performance at work, relieving stress, etc.).

One of the core cosmopolitical issues beneath the Occupy movement concerns the relationship between work and play. Has not our capitalist civilization become imbalanced in respect to the activities associated with these two modes of consciousness? I quote Bellah at length:

“In our society, [playful activities] tend to be viewed as ‘less real’ than the world of daily life, as fictional and ultimately as less important than the world of working… Yet one of the first things to be noticed about the world of daily life is that nobody can stand to live in it all the time. Some people can’t stand to live in it at all–they used to be sent to mental institutions, but today in the United States they can be found wandering the city streets. All of us leave the world of daily life with considerable frequency–not only when we are sleeping and dreaming (the structure of dreams is almost completely antithetical to the structure of the world of working), but when we daydream, travel, go to a concert, turn on the television. We do these things often for the sheer pleasure of getting out of the world of daily life. Even so we may feel guilty that we are shirking our responsibilities to the real world. However, if we follow the analysis of Alfred Shultz [mentioned above], the notion that the world of daily life is uniquely real is itself a fiction that is maintained only with effort. The world of daily life, like all the other multiple realities, is socially constructed… [It is usually] seen solely as a world of rational response to anxiety and need, [and as such] is a world of mechanical necessity, not radical autonomy. It is through pointing to other realities, through beyonding [Kenneth Burke’s term], that religion and poetry, and science too in its own way, break the dreadful fatalities of this world of appearances”(p. 3,9).

Bellah points to art, science, and religion as practices and modes of consciousness equally capable of lifting us out of the world of daily life to reveal something beyond, something more real, in fact, than working. The world of working is a world of lack, of deficiency. The world of play is one of fullness, a plenum, wherein everything becomes symbolically possible. It is not only a culturally instilled sense of guilt that prevents us from breaking free of the world of work, though it is surely that, too. There is also the fear of death. Religion in its degenerate forms has not done much to assuage this fear. In its perennial forms, however, religion is the surest expression of humanity’s faith in the immortality and universality of the soul. I would argue that, until individual human beings are released from the egoic anxiety resulting from their consciousness of death, we will never come close to realizing a cosmopolitics of play, where communal celebration, rather than private capital accumulation, becomes the norm. The carnivalesque atmosphere of the various #Occupy encampments represents a pre-linguistic, almost mimetic/enactive cosmological critique of capitalism. The drumming, dancing, and playfulness are a direct challenge to the legitimacy of the world of working.