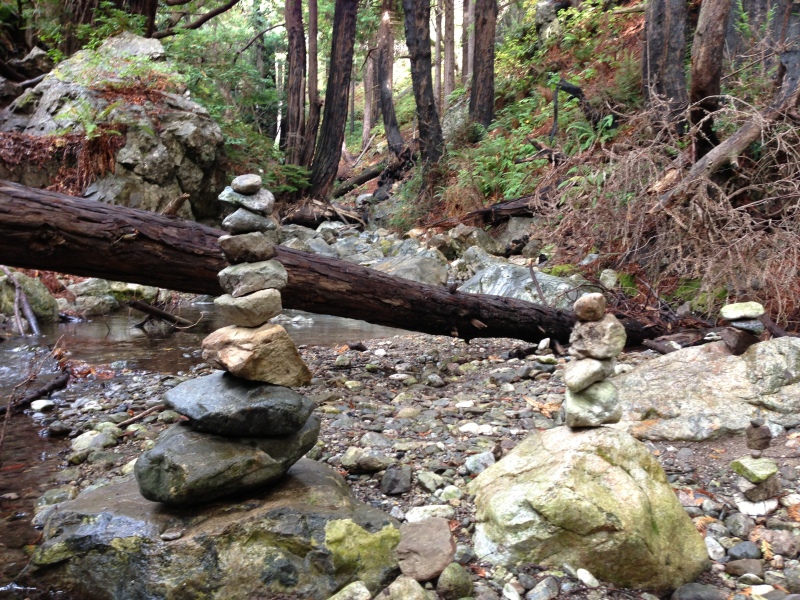 These rocks, stacked by human hands along a canyon creek near Esalen Institute in Big Sur, California, are not simply aggregates or piles. Neither are they simply the freely created artwork of humans. The left-hand stack of eleven rocks (if you count earth) towers toward the sky, together with its local and cosmic ecologies achieving the status of a self-organizing, living being. Locally, human hands have conceptually lured the rocks into a vertical line, while cosmically, the chemistry of electricity and the magnetism of gravity have pushed and pulled them into place. The life of this self-organizing entity has a definite beginning–a birth, and will have a definite ending–a death.

In tactilely experimenting with these rocks, I quickly discovered that removing the top rock, even with great care so as to minimally disturb its underlying neighbor due to friction, almost always destabilizes the entire stack. The stack’s center of mass is complexly distributed among its contributors. Because the stack depends on the maintenance of this center for its survival, the whole stack can be said to be contained in each of the rocks which compose it. In this sense, the parts are greater than the whole.

In another sense, however, the whole is greater than the parts. In attempting to re-stack a fallen pile, I found that achieving the collective stability of the rocks demanded more than simple addition. There was an emergent factor not present in each of the rocks until the last rock had been placed and the whole had cohered.

Once shaped in skyward form, their masses mutually measured in perfect harmony, the many become one and were increased by one. When not only created but encountered as sacred by human beings, I believe the pile can become a person.* It can incarnate a soul, eleven rocks becoming so many organs of a single bodily life. To see the stone stacks this way, they must be allowed to transcend their status as human art. They must be seen for what they are: creatures of living nature.