“Two things fill the mind with ever-renewing wonder and awe, the more often and the more intensely the mind is drawn to think of them: the starry heavens above me and the moral law within me.” So says Kant in the conclusion to his Critique of Practical Reason. He goes on to explain that neither the sky above him nor the freedom within him should be considered mere conjectures. Neither is beyond the horizon of conscious experience. We sense the celestial lights above through our eyes, and we sense the moral freedom within through our heart, the innermost source of our self-hood. Kant continues: “The former view of a countless multitude of worlds annihilates my importance as an animal creature, which after it has been for a short time provided with vital power, one knows not how, must again give back the matter of which it was formed to the planet it inhabits (a mere speck in the universe). The second, on the contrary, infinitely elevates my worth as an intelligence by my personality, in which the moral law reveals to me a life independent of animality and even of the whole sensible world, at least so far as may be inferred from the destination assigned to my existence by this law, a destination not restricted to the conditions and limits of this life, but reaching into the infinite.” 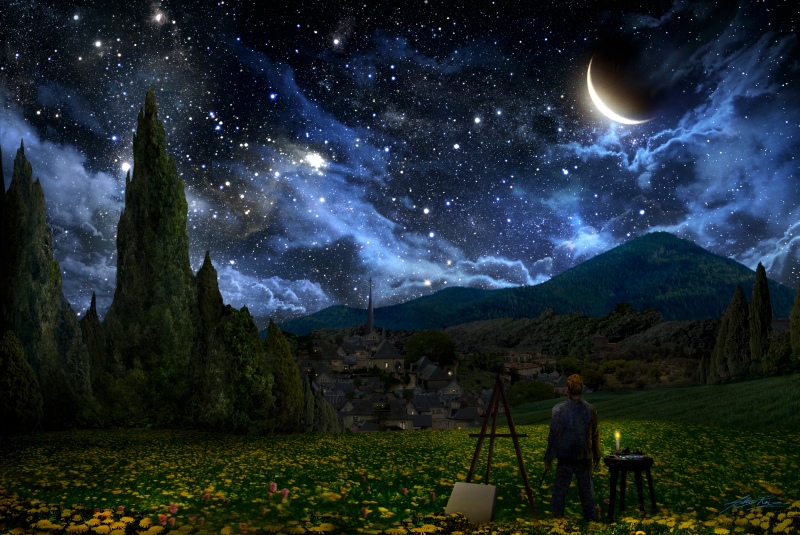 I started thinking about Kant’s accounts of beauty, sublimity, and morality after reading Levi Bryant’s recent post on beauty as an absolute value. An absolute value, in Bryant’s sense, is a value that we hold for its own sake as an end in itself. He discusses beauty as one example of such a value and wonders what role it might play in resisting the instrumentalizing tendency of neoliberal capitalism, whereby every aspect of life comes to be valued only in terms of its usefulness or profitability. Bryant suggests that the earlier theological understanding of beauty (i.e., beauty as an index of a divine Creator) must be replaced by an immanent, naturalistic account. He writes:

The question then becomes that of why we find the beautiful beautiful, of why we encounter the beautiful at all.  This is not a question– at least at first –of what we find beautiful.  In other words, it is not a question where discussions of harmony, pattern, and proportion would be appropriate answers.  Again, the question here is not what is beautiful, but why such things would be beautiful to us at all.  What is the ground of the ability to have, as Kant put it, “disinterested pleasure” or the ability to find things beautiful?

To phrase the question in Kantian terms opens the door to a sort of transcendental compromise between earlier dogmatic accounts of beauty as the work of a transcendent Creator and later materialist accounts in terms of evolutionary survival value. It is clear enough to me (and of course to Bryant) that a transcendent Creator offers us little in the way of a rational explanation for beauty. It is just as clear that an account of beauty in terms of its survival value won’t do, either, and for precisely the reasons that Bryant articulates: such an explanation must first translate beauty into instrumental terms as a means to the end of survival. Darwinian accounts of sexual selection help us understand part of the reason male peacock feathers are so ornate, but the underlying causal efficacy of an organism’s perception of and response to beauty remains an unexplained explainer. A further problem is that many interpretations of naturalism forbid the idea of organismic agency or purposiveness, making the perception of beauty underlying sexual selection an even bigger mystery.

There are other interpretations of naturalism, of course. From a Whiteheadian point of view, wherein beauty is the very teleology of the universe, the locus and valence of mystery are shifted elsewhere. Mystery is no longer a problem to be explained, but a reality to be experienced (to paraphrase Frank Herbert). Whitehead’s is an aesthetic ontology, which is to say that aesthetic achievement is the very essence of reality. All order is aesthetic order. To “understand” this order means nothing more or less than to experience its beauty.

Returning to Kant’s famous statement about the starry heavens above and the moral law within, I think we can validate the physical feeling he is attempting to express even if we are forced to reject the metaphysical conclusions he draws from it. If human beings have any moral freedom and worth, it must be the freedom and worth we share with animals. For we are animals. Accepting our creatureliness and our dependence on the ecological networks of Earth doesn’t require that we deny our participation in the infinite. It is our intuition of the infinite, both outside and within ourselves, that generates beauty. Instead of, like Kant, sharply dividing animal aesthesis from moral or spiritual noesis, we can recognize the sublime heights of the heavens and the sublime depths of the heart as equally aesthetic in nature.

Beauty, then, is an end in itself precisely because of its infinite sources. We cannot reach beyond or behind its inner and outer appearances. In this sense, this is an immanent account of beauty. When we try to peer beyond the cosmos outside us, or plumb the psyche within us, we find only more appearances, an infinite progression of appearances. When the intellect tries to grasp the infinity of aesthesis, it slips into an infinite regression. It fails to find an original ground or fundamental reason for the ongoing aesthetic genesis of reality. Only the imagination can intuit the meaning of the infinite aesthetic progression of beauty.

I realize I am disrespecting the differences Kant sought to establish in his Critique of Judgment between the beautiful and the sublime. But part of what an aesthetic ontology requires is that the sublime be de-Kantianized. Kant took the aesthetic “too muchness” of encounters with the sublime (like the starry night) and tried to redeploy them as evidence of humanity’s moral superiority over nature. He comes so close to decentering the human in the face of the sublime depths of the cosmos, and then backs away into artificial moralizing. There is so much more that could be said about all this, but for now I can only muster an ellipsis (and a link some thoughts of mine from several years ago about the links between ethics and aesthetics)…