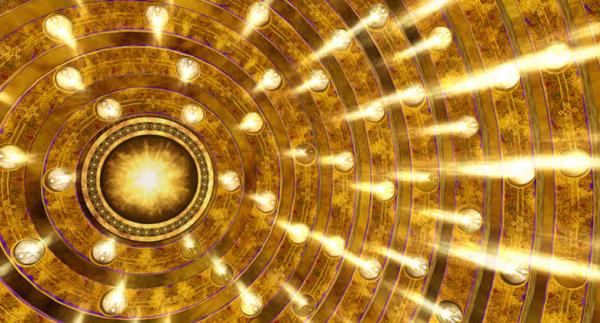 Levi Bryant (Larval Subjects) recently unpacked his position that object’s are “spacetime worms” (HERE). It got me thinking about the arguments that thinkers like Bergson and Whitehead had with Einstein regarding the philosophical implications of his equations. Bruno Latour spoke about this issue HERE. For Bergson, “time is invention or it is nothing at all,” while for Einstein, time is merely “a stubbornly persistant illusion.” Bergson experienced the universe as a creative evolution, while Einstein bracketed the evidence of his experience in favor of mathematical transformations on the Cartesian coordinate grid. Jayveeaitch posted a comment to Bryant’s piece wherein he linked to a wonderful essay about the precursors of relativistic time in Kant and Schelling (HERE). He unpacks Schelling’s position regarding the dynamic evolution of Nature in terms of Spirit’s self-externalization. The position requires that Schelling temporalize the eternal. After quoting Schelling’s Freedom essay,

Although man is born in time, he is created in the beginning of creation (the center). The act by which his life in time is determined does not itself belong to time, but to eternity, nor does it precede time, but moves through time (untouched by it) as an act by its nature eternal. Through this act man’s life extends to the beginning of creation; thus through it he is beyond creation as well, free and himself eternal beginning (259)],

In Ages of the World, Schelling expansively elaborates on this inchoate conception of the ground or the center of creation firstly by stating that in the ground the individual creature originally exists in the mode of an archetype, as a kind of spiritual image, a pure determinate potentiality of body, spirit and soul awaiting, or rather, yearning for actualization. But the archetypes cannot actualize in the ground because there is neither space nor time in it to do so. As Schelling describes it, there is no true up or down or left or right or before or after in the ground. Rather, it is a kind of dimensionless, infinitely involuted singularity, a black hole within which three divine potencies (corporeal, spiritual, and psychic) circulate in an unending rotary motion, literally fighting over the locus of being. However, the very dynamism of the annular drive suggests some kind of temporality, and therefore some kind of before and after. As Edward Allen Beach points out, in the incorporation of “genetic principles into the very core of [his] ontology,” Schelling undertakes the temporalization of the eternal and the essential (P 112).

Schelling reads time, then, not as another extended dimension like space, but as the very potency of a spiritual process hidden in the core of every extended being. The 4th dimension isn’t an extended spacetime dragged behind or thrown out ahead of a being; rather, it is the internal principle of its genesis, the archetypal form “yearning for actualization” in a living body. The invisible form can never finally achieve full actualization (that would be death), and so instead it exhibits itself as the entelechy of the creature. This process of archetypal incarnation makes it appear in the physical plane of extension that the creature is always becoming other than itself, its material parts constantly replaced in time; but on the spiritual plane, the creature remains what it is because it dips into the eternality at the root of time. When in the Timaeus, Plato refers to time as “a moving image of eternity,” he is hinting at something very similar. We think of time as the universal background by which we measure the succession of events or the motion of objects; but if time is really eternity, and eternity is in all things, then time is the creative potency–the I AM!–powering the free decisions of every creature in the Universe.

Autopoiesis is a description, in physical terms, of a process that must also be understood spiritually (i.e., in archetypal terms). A living system possesses an identity that cannot be understood in terms of its parts alone. It is not just a machine, but a locus of self-concern [See Varela’s last paper, Life After Kant (2001), where he distances himself from the “machine” metaphor while arguing for the need to bring purposes back into biology]. The apparent wholeness of the organism is more like a “black hole” whose archetypal power maintains the being’s inner identity despite the ongoing chemical and physical transformation of its body. From this “hole,” infinite freedom enters the world to take on definite form. Rather than a spacetime worm, I’d offer the image of a torus to understand what organisms (or objects) really are. [For more on the relationship between toroidal dynamics and embodiment, see Logos of the Lived Body].